The second generation iPhone SE for 2020 is here - also called the iPhone SE 2. Let's find out if it's worth getting on contract, now that the iPhone 8 (on which it is based) has gone out of production. If you're looking for a cheaper iPhone than the current range, but still need an Apple product, then this one might just be for you...

iPhone SE 2: New, but with an old design

Visually, the current iPhone SE has nothing to do with the first, but instead is the rebirth of a classic: It looks exactly like the iPhone 6, 6S, 7 and 8. Curiously - and unlike other iPhone launches in the past -, there is a bright red (PRODUCT)RED variant available at the start.

The good news is that old iPhone 8 cases should fit, and the general operation does not change. There is no reinvention of the wheel here.

However, there are a few changes elsewhere: Apple has deleted the "3D Touch" function in iPhone SE (2016), in which pop-up menus were activated by applying more pressure. Instead, as with the iPhone XR, the company relies on "Haptic Touch", that is, activating the submenus by pressing for a longer time.

Since you usually press longer when pressing harder, the difference in everyday life is hardly noticeable.

The old design had its advantages, too. Although Apple's Face ID works well in everyday life and, unlike the supposedly unsecure face recognition of many Android phones, is difficult to crack, there are still users who do not want to miss the fingerprint sensor and home button.

You can breathe a sigh of relief here though: FaceID is not used; like the iPhone 6S, 7 and 8, a "Taptic Engine" is built into the home button, which imitates the operating feeling of a mechanical pressure point convincingly.

This makes the iPhone SE (2020) the only current Apple phone that can be biometrically unlocked by users with a coronavirus mask ;) 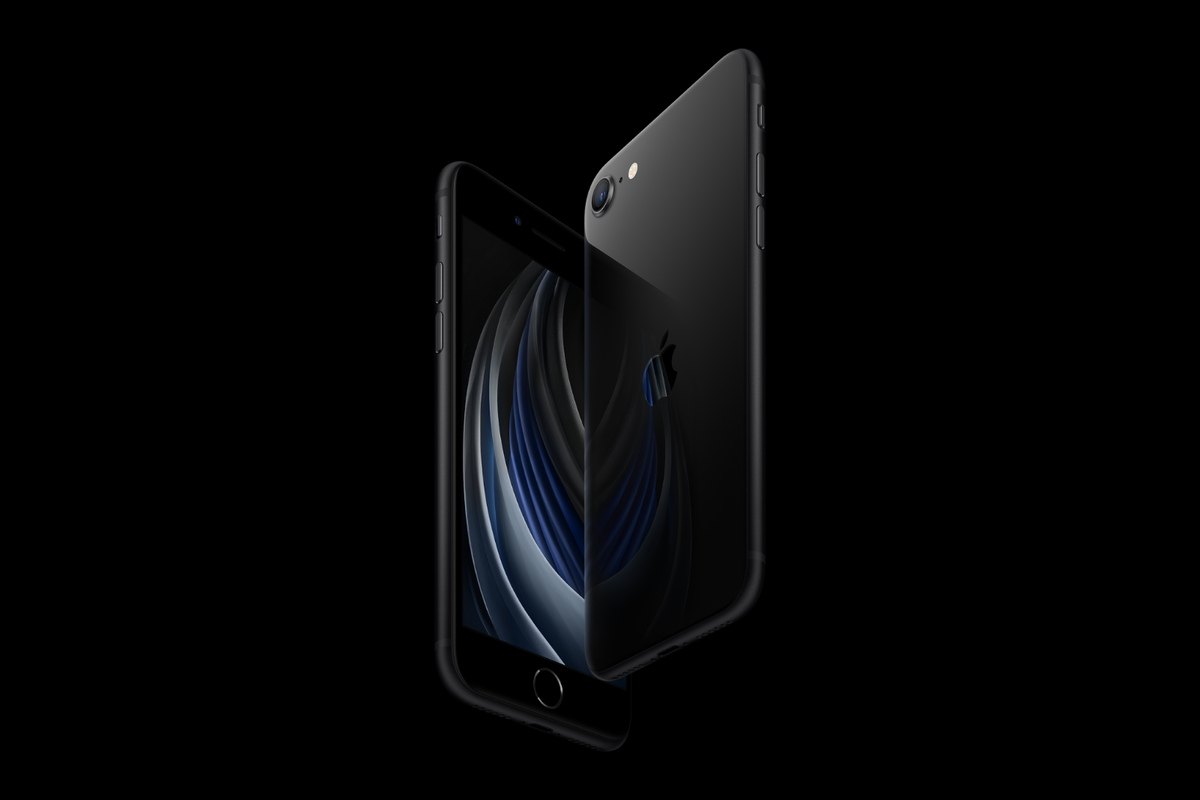 From the exterior design alogn, the SE 2 doesn't look like much different, but Apple has added quite a lot under the bonnet. A powerful A13 chip drives the smartphone. It can also be found in the devices from the iPhone 11 series such as the iPhone 11 Pro, making them the fastest smartphones in the world even in early 2020 and loosely outperforming every Android processor. As a result, the iPhone SE (2020) is smaller, but still faster than the iPhone XR from 2019 with the A12 bionic processor.

The results of the Foned in-house camera test are particularly exciting. On the one hand, Apple uses a slimmed-down technology with only one standard lens compared to the current 11 generation; both the tele lens of the Pro models and the ultra wide-angle camera of the iPhone 11 are missing.

On paper, the 12-megapixel camera appears to be technically identical to the main lens of the iPhone 11. On the other hand, a major difference between the iPhone SE camera and that in the first iPhone SE (as well as in the iPhone 8) is the more modern and faster image processing system.

The fast A13 bionic processor makes it all possible... thanks to this, the iPhone SE 2 also receives the new "Smart HDR" technology, which recognises objects like faces and automatically sets the appropriate brightness for these areas in HDR multiple exposures.

It also includes all the extras of portrait mode, such as the black and white mode and the expanded bokeh effect for the front and main cameras. If you hold the button down in photo mode, a video recording starts automatically, - optionally in 4K - to 60 frames / second or in Full HD with extended dynamic range (HDR).

The runtime is probably much lower than that of the iPhone 11 with its 3,110 mAh battery. Apple probably includes the well-known 5-watt power supply with a large USB-A connector for the iPhone SE. It's nice and small and the associated USB Lightning cable also works on older computers without USB-C, but the charging speed would be as slow as that of the iPhone 8.

The good news is, that with a suitable USB-C power supply like the anchor PowerPort III Mini (around 20 quid) and fast-charging USB-C Lightning cable works with Fast Charging with 18 watts. Wireless charging is also possible.

The more expensive ProductRED colour means that some of the increased cost goes to charity - and it also looks pretty cool, too. 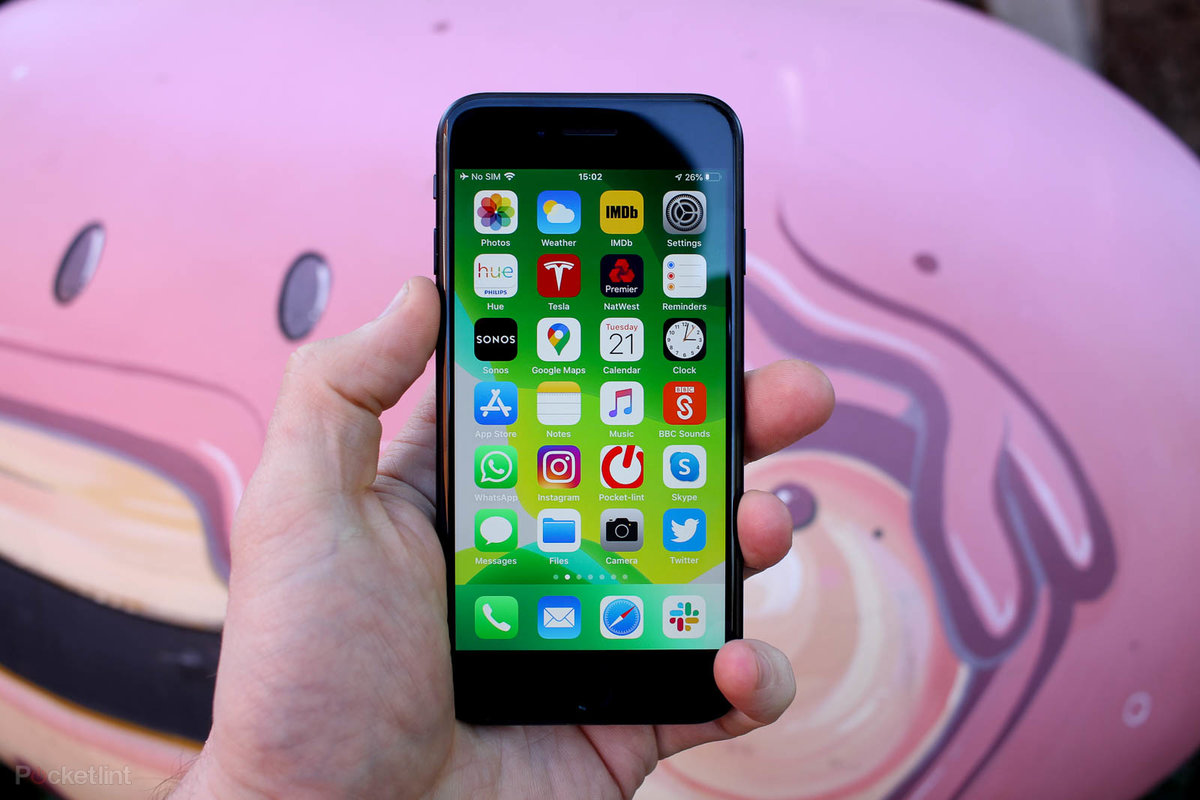 Verdict on the iPhone SE 2

If you are buying an iPhone SE in 2020 then make sure compare prices on monthly contracts. Although it's a cheaper Apple phone, it makes sense to check on the pricing first and compare monthly quotes. That is what Foned is here for - any time of day, compare contract prices on any Apple model.

Other phones to consider:

Without a doubt, yes. It's the cheapest iPhone for a while and might not be around forever; the last iPhone SE was discontinued after a year or so. So make the most of this budget iPhone 2020 model while you can.

The following colours are available right now on pay monthly, on all networks: productRED, black, white, Rose Gold, Space Grey, and Silver. Quite the selection...!

You can get the iPhone SE 2 from £15 a month right now, with a reasonable upfront of about £200 or so. Check our deals above for the latest pricing on the Apple iPhone SE 2020 (new edition).

The cheapest monthly cost for the iPhone SE (2nd gen) currently is £10.50 a month. Although this varies depending on how much upfront you want to pay – if you are looking to spend about £100 upfront then there are a number of deals on the Apple iPhone SE (2nd gen) available right now via pay monthly.

Is SIM Only better for iPhone SE (2nd gen)?

Generally speaking, SIM Only is cheaper but you don't have the benefit of paying monthly for your handset like the Apple iPhone SE (2nd gen), so it only really makes financial sense if you are in the fortunate position to be able to buy the handset outright first. Yes, it works out cheaper overall if you can do that, at least nearly always – but it is really a personal preference. Find out more about SIM Only Deals here

Foned completely gets it, it's not easy trying to understand the differences of each mobile network operator. Is o2 any better than Vodafone for this smartphone, when it comes to coverage? Or worse? It's a real minefield. Another example, which is better? A Apple iPhone SE (2nd gen) ee contract or a Apple iPhone SE (2nd gen) Tesco Mobile contract?

Before you decide to buy a contract or handset, it's important to know if you'll get a signal. Who wants to be walking around into mobile network's blackholes?! After all, ordering your brand new Apple iPhone SE (2nd gen) contract only to find you can't use your data (never mind going over the allowance!) in your own house will be pretty not cool.

So what are you waiting for – search for your desired Apple iPhone SE (2nd gen) handset colour, and perfect contract using our filters.

A relatively simple SIM Only comparison calculation is to add up how much a Apple iPhone SE (2nd gen) SIM Free phone would cost to buy i.e. this is where you buy the phone without a contract and pay for the full cost of the handset upfront.

The benefit here is flexibility: you're able to then compare the SIM Only contract market where Mobile networks often give you far better usage allowances and shorter contract terms. Once you've found a SIM Only contract that meets your needs, note the monthly cost over the course of 24 months and add this to your SIM Free Apple iPhone SE (2nd gen) handset cost. You're now in a great position to compare this cost to a regular Apple iPhone SE (2nd gen) Contract.

Pro Tip: A great way to save a few extra pounds when comparing SIM Only contracts, is to consider purchasing a pre owned Apple iPhone SE (2nd gen) phone from the likes of musicMagpie, SellCompare or GiffGaff Recycle, who provide warranties and flexible handset payment terms.

If you take out a contract on this device then Apple will helpfully provide you with a charger, headphones, the device itself, and a few other things beside. See our full list of items below: