Confused? Us too. All you need to remember is that the Honor 20 is 'the' handset of the moment - so let's go in and review it.

At first glance, the Honor 20 and the Honor 20 Pro are almost confusingly similar. The size is identical, the camera unit is placed on the back top left, the metal frame gently rounded and attached the power button and fingerprint sensor on the right side. If you take a closer look - or look at the data sheet of both models - there are differences.

Otherwise, at least in front and at the sides everything is the same. The Honor 20 offers the same 6.3-inch IPS LCD with punch hole Notch top left for the front camera. On the right, the volume rocker and power button and fingerprint sensor are embedded in a rounded frame. Even the IR blaster on the front of the smartphone is identical.

This praise also extends to the great workmanship. The Honor 20 has the same plastic antenna strips in the metal frame as the Pro. But you can only see them when you look closely, you can not feel them when you're stroking them with your finger. Even otherwise, the workmanship is impeccable. Different are the colours of the two models. 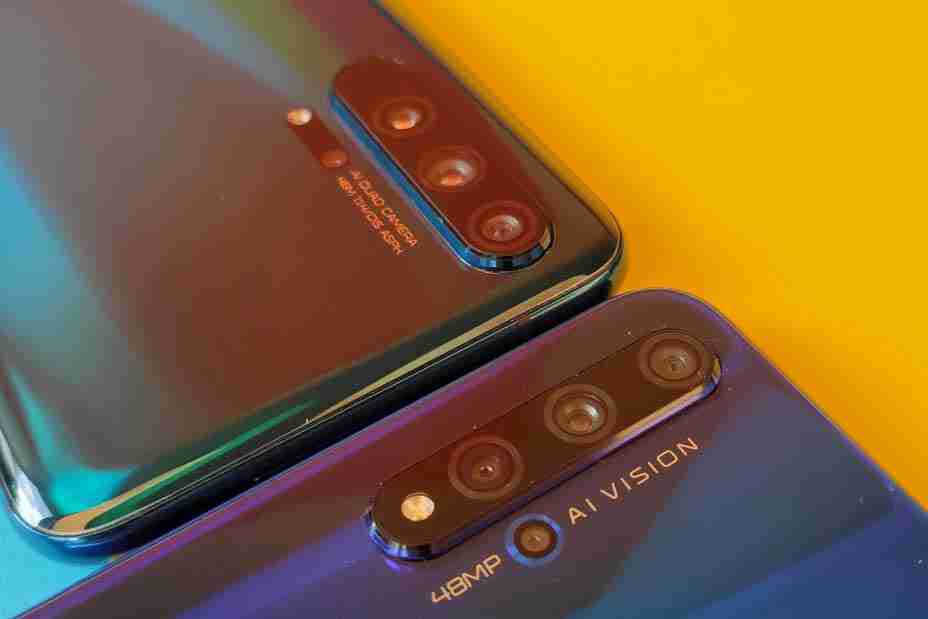 However, this is only hinted at by the name of the manufacturer: For the Pro model, the colours are somewhat mysterious Phantom Blue and Phantom Black, while the Honor 20 is pretty standard Midnight Black and Sapphire Blue. Chic was one word to describe our blue test model but also without play of colours, especially as light is strikingly reflected and has a similar depth effect as the Pro model. At very low viewing angles, the dark blue turns into black, so most people won't be able to tell the difference down the pub...

Four cameras are four cameras, so Honor 20 and Honor 20 Pro are equally good at photos and videos - you might think so but that is not quite so, is clear when looking into the data sheet. Because the main camera has 48 megapixels and the f / 1.4 aperture, the super wide-angle optics with 16 megapixels, f / 2.2 and 117 degrees field of view and the macro camera with 2 megapixels and open aperture of f / 2.4 are basically the same. There are differences in the fourth camera. The Pro model is a teleoptics with f / 2.4 aperture and 3x magnification, while the Honor 20 only has a 2 megapixel camera for depth detection.

Or to put it more clearly:  Huawei decided that the Honor 20 should have no telephoto lens. That is not all. Because the cheaper Honor 20 must not only do without laser autofocus, but also without optical image stabilizer (OIS) - but now cheaper smartphones at £300 or so have them... The front camera is then the same again, it allows photos with 32 megapixels and f / 2.0. 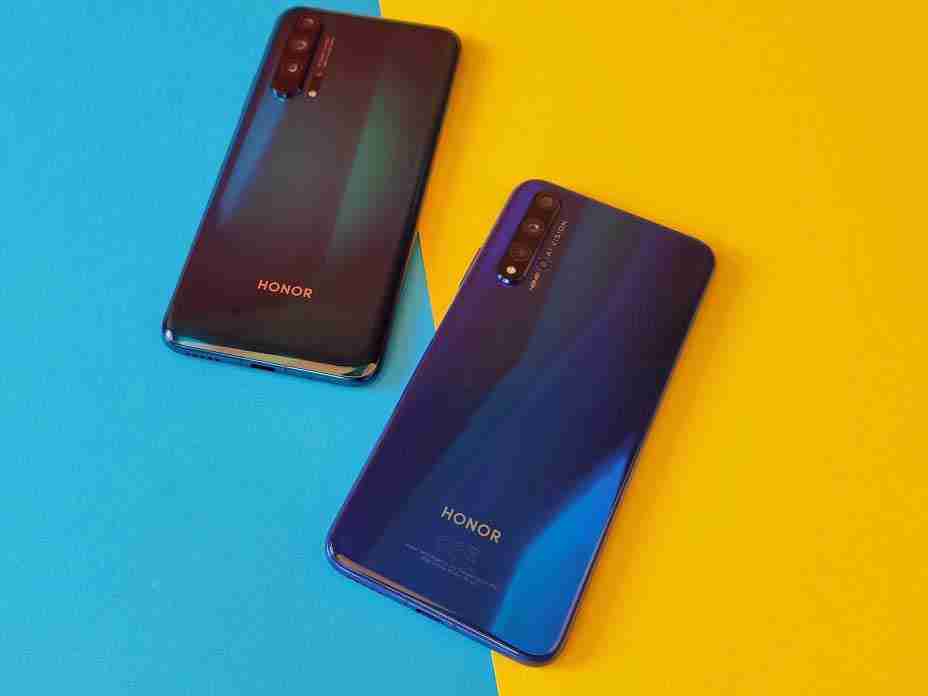 The Honor 20 is powered by Kirin 980, Huawei's top processor, like the more expensive brother the Pro. Although it does not quite match its counterpart to Qualcomm, the Snapdragon 855, when it comes to performance in benchmarks, it still offers significantly more power than current apps demand.

Because of the same chipset, the rest of the hardware features like Wi-Fi, Bluetooth and GPS are identical. Main difference to the Pro model in the equipment are memory and internal memory, here offers the Honor 20 "only" 6 instead of 8 GB of RAM and 128 instead of 256 GB of internal memory. It is not expandable even with the "small top model". The fingerprint sensor in the Powerbutton, which can be used as a right-handed person with the thumb, responds as quickly and reliably as the more expensive model.

The battery is the last thing that distinguishes Honor 20 and Honor 20 Pro. While the Pro model is equipped with a 4000 mAh battery, the battery in the Honor 20 with 3750 mAh has a slightly lower capacity.

Because of the otherwise largely identical features - especially in the display and processor - it is not surprising that the cheaper model also has a shorter runtime. If the Pro version in our video test still managed almost 13 hours, this value drops to almost 12 hours on the Honor 20. That's still good, depending on the usage behaviour it can be done for 1 to 3 days.

Wireless charging is also not available on the Honor 20. Since this is not the top model, it is easier to get over than the Honor 20 Pro. The Honor 20 also needs around 1.5 hours for a full battery charge.

How much does the Honor 20 cost on contract?

Given that it costs about £499 in the UK at launch, the Honor is cheaper than you might expect - on contract expect to pay about £25 per month for a 18 month contract with reasonable data. There are several unlimited data deals available on the Honor 20 now too. 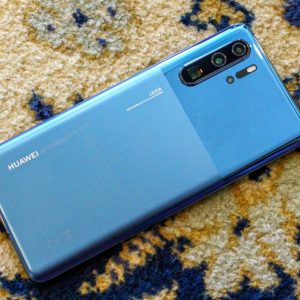 It's one of the best Android devices around today, and Huawei knows a good thing when they come across it. In the past few days, the Chinese company has announced a refresh to the P30 Pro line - s...
2 min. read